Here they are again rehearsing. It takes practice and hard work to sound this good!

Meet the people behind the choir… 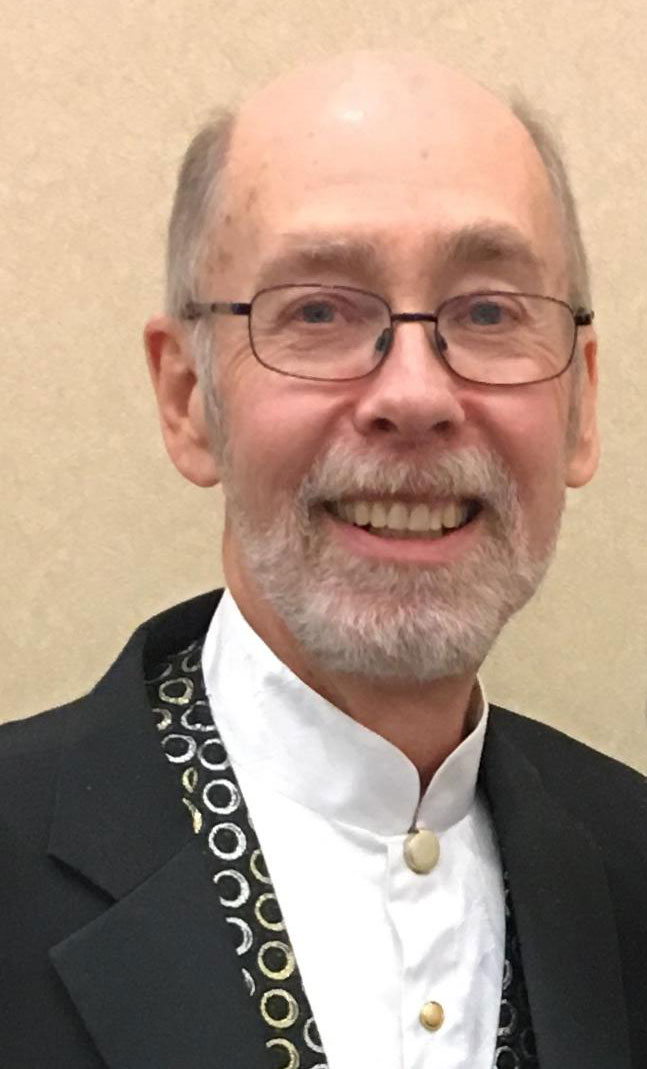 Jim holds a Bachelor of Arts degree in Choral Music and Piano Performance from Augustana University in Sioux Falls, SD, and a Master of Arts degree in Music Education from the University of Iowa. He taught secondary choral music in Iowa for seven years and was the Minister of Music at American Lutheran Church in Huron, SD from 1978-1990.

From 1990-2016 Jim served as full-time Minister of Music at American Lutheran Church in Prescott where he directed seven vocal choirs, five handbell choirs, and various instrumental ensembles. He conducted the Yavapai College Master Chorale from 1993-2007, leading the Chorale on three international tours to Central Europe in 1998, Italy in 2002, and Scandinavia in 2007.

He and his wife Eileen, who served with him as organist in his church positions, are officially retired, but they are not REALLY retired! Besides serving as Artistic Director of Camerata Chamber Singers (CCS), Jim sings in the YC Master Chorale and St. Luke’s Choir, directs the Ringers of St. Luke’s handbell choir, High Desert Ringers (advanced community handbell choir), and plays piano/keyboard for the Prescott Pops Symphony. He is also arranger and advisor for Eine Kleine Freunden Musik (EKFM), a four-person ensemble of handbells, vocals, and piano, that has provided music for area worship services, both live and virtually during the pandemic.

Jim and Eileen have two children, Eric and Julie, and three grand dogs, Bill and Ted, Paddles, and Ripley. They also are proud owners of Marco, a sweet Maltipoo who provides daily entertainment. 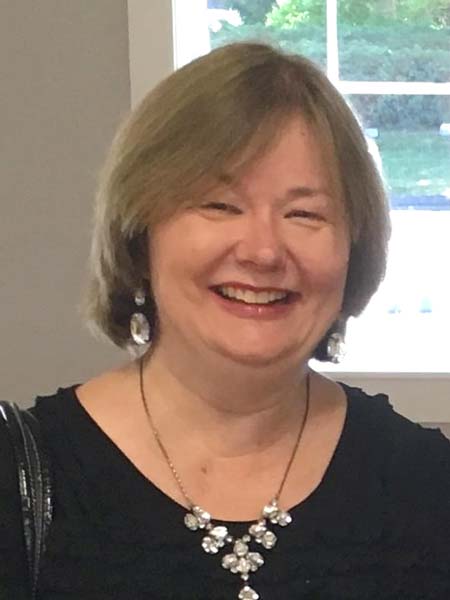 Pianist Benita Rose is in frequent demand as a soloist, accompanist, chamber musician, and teacher. She is professor of piano at Yavapai College and is pianist/organist at American Lutheran Church. She has performed on three continents. She has been invited to be a presenter at upcoming piano pedagogy conferences in California and Oklahoma. She and husband Tony Gibbs were top prize winners in the 2008 International Chamber Music and Ensembles Competition and appear frequently in recital. 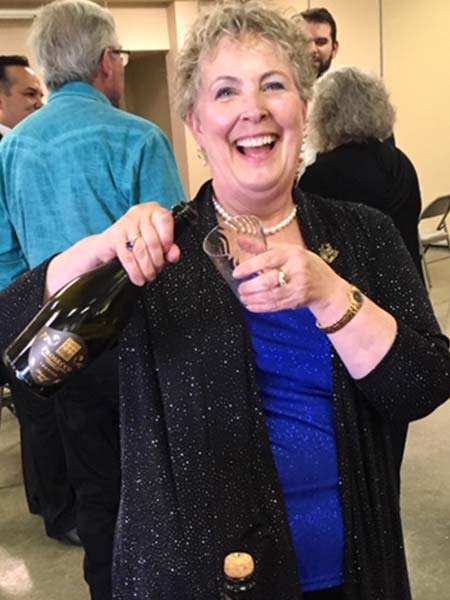 Sue Boyce has a sociology degree from Albion College and a degree in music history from the University of Michigan. She has sung in church choirs and semi-professional choral groups her entire life. Since moving to Prescott in 2010, Sue has sung with Master Chorale, Prescott Chorale, Camerata Singers ( of which she is the only remaining founding member), and Eine Kleine Freunden Musik, as well as multiple church choirs. Sue currently studies voice with Deborah Raymond in Flagstaff. 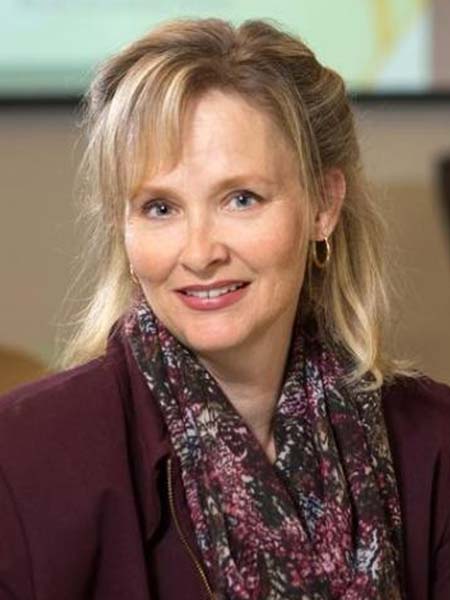 Patricia McCarver has lived in Prescott since 1989. She has sung with Yavapai College Master Chorale since 1991. Pat has been a featured soprano soloist for performances of Handel’s Messiah, Vivaldi’s Gloria, John Rutter’s Requiem, Bach’s Magnificat in D, Faure’s Requiem and Mozart’s Coronation Mass and Vesperae solennes de confessore. Pat has sung with the Camerata Chamber Singers since 2017. 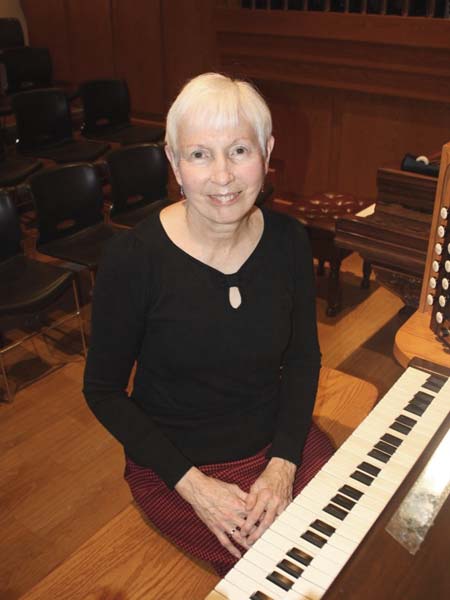 Eileen has accompanied and performed vocal and instrumental music since 6th grade in schools and churches. Her first love has been playing the organ/piano in 5 churches in 3 states and currently subs. She has sung in church choirs, YC Master Chorale, Prescott Chorale, Camerata Chamber Singers, and is playing in 2 handbell choirs. She accompanies, sings, and plays handbells in EKFM, offering virtual and live music to local churches. Eileen enjoys international travel with her husband, Jim, walking our Maltipoo dog, Marco, hiking, and doing crossword puzzles. 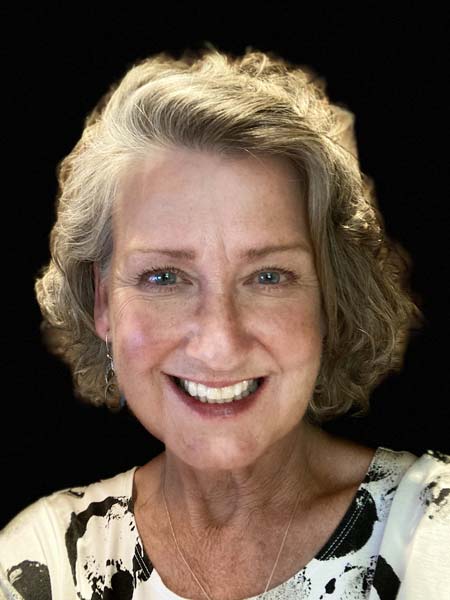 Linda Hoover is a lifelong lover of all things music! She is a graduate of Ithaca College School of Music with degrees in Vocal Performance and K-12 Music Education. Linda’s first love was musical theatre and lucked into several dozen much-coveted roles. Linda has been featured as a soprano soloist with various groups, among them the Southwest Consort led by Joseph Place, Camerata Singers directed by Dan Boyce, and the Prescott Chorale under the baton of Dennis Houser. Linda currently serves in music ministry with Mountain Reformed Church and Trinity Presbyterian Church. While music holds a special place in her heart, nothing makes Linda happier than time spent with her beautiful husband, children and grandchildren. 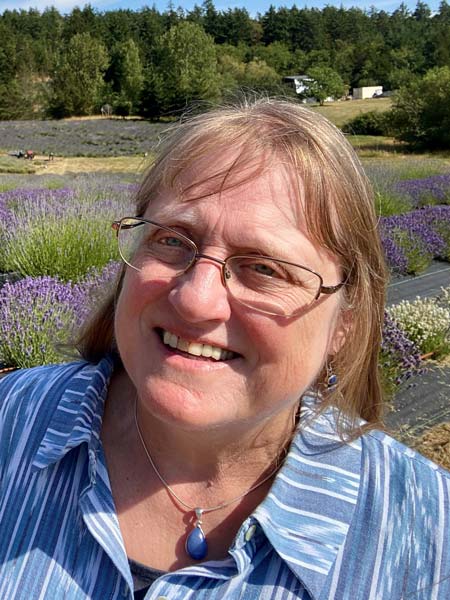 Diane Thornbrugh is retired with a career in Finance, Camerata Treasurer, Music Minor. She currently sings with Womansong, CCS, Arizona Musicfest, and Yavapai College Master Chorale. Other past choral affiliations include Prescott Chorale, Arizona Masterworks Chorale, and Santa Clara Chorale in California. Diane plays the piano for home enjoyment, has a passion for gardening, is a volunteer Master Gardener with Yavapai County extension office and Sharlot Hall Museum garden. 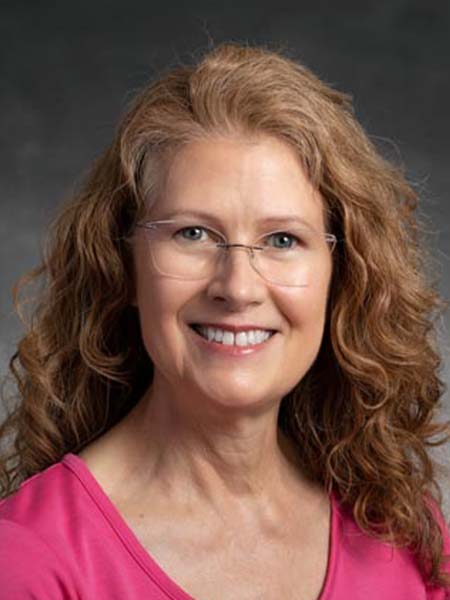 Gayle is a child/adolescent psychiatrist practicing at Ponderosa Pediatrics in Prescott. In her youth she played the oboe. She has sung with YC Master Chorale and Renaissance Choir, and Prescott Chorale. Currently ringing with 2 handbell choirs, she has also performed with smaller handbell ensembles. She loves hiking in the forests surrounding Prescott. 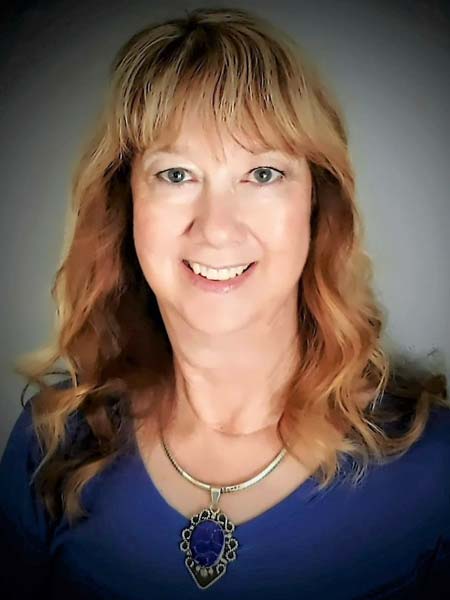 For this early childhood teacher of the deaf and hard of hearing, music goes beyond the auditory experience to visual and sign language interpretation of melody and lyric. Helen uses her love of music, as expressed through her involvement in instrumental and vocal ensembles since childhood, to develop language skills with the children with whom she works. 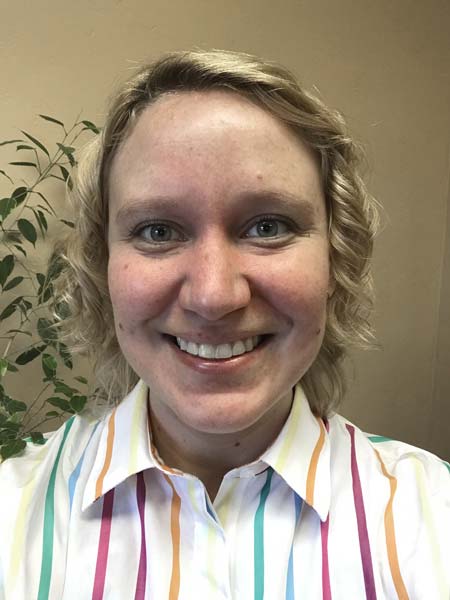 Lyndi Peacock is a consummate church musician with a penchant for recorder and ukulele. Aside from her passion for sacred music, she is best known for her love of small creatures and lively sense of humor. Lyndi holds a Bachelor’s in woodwind performance and has served in music ministry since 2010 as a choral conductor, singer, and instrumentalist. Currently she sings with the Sanctuary Choir and assists in worship for Mountain Reformed Church. 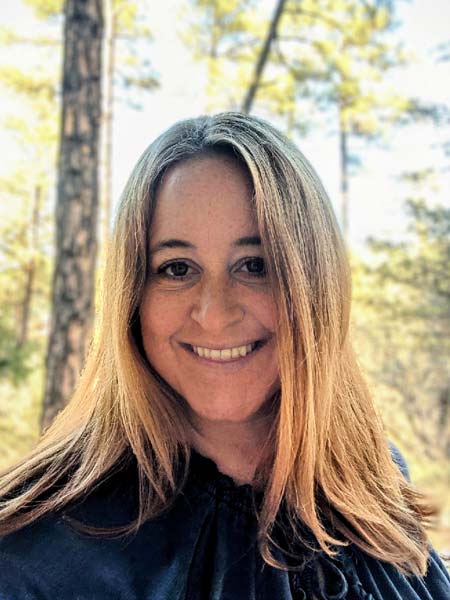 Kari Roller earned her music degree from the School of Choral Knocks with an emphasis in Shower Singing. She’s currently spending the rest of her life pursuing a PhD in serial community choir singing, having most recently sung with Prescott Chorale, San Diego Master Chorale, and Anna’s Bay Chorale. When not out exploring the hiking trails of northern Arizona, Kari teaches individuals with developmental disabilities and serves as a reference librarian at Prescott Public Library.

Katie Staudt initially studied the clarinet and piano. Handbells and chimes are her current instrumental focus, which she plays in Eine Kleine Freunden Musik, High Desert Ringers, St. Luke’s Bell Choir, and as a soloist. Her family moved to Prescott 6 years ago in their 11th move. She holds a BA in Elementary Education with a specialization in reading and is the current vice-president of CCS. She playfully tells others that music, knitting, and weaving help keep her out of trouble. 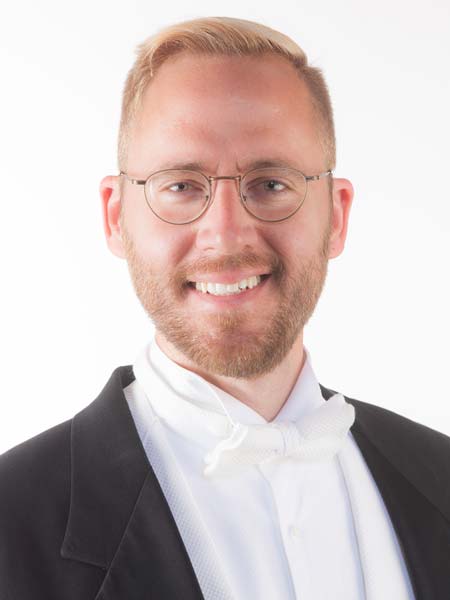 Prescott native Ryan Gastonguay wears many different hats in the musical realm: sacred, choral, chamber, orchestral, conducting, brass, barbershop, wind band, you name it! He is a well-known face on the scene in our quad cities area. Ryan currently serves as the Minister of Music for Mountain Reformed Church as well as being the Associate Music Director/Conductor for the Prescott Pops. He is a proud Sun Devil alumnus, having earned his Bachelor’s from Arizona State University. 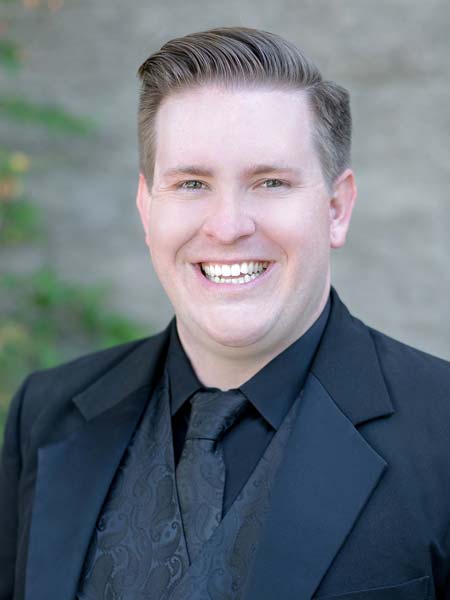 Dr. Joshua Harper enjoys a multifaceted career as a Conductor, Tenor, and Educator. He is the Director of Choral Activities at Yavapai College. Harper is a Guest Conductor with the Arizona Philharmonic and founding Artistic Director and Conductor of the Professional Chorus, Quartz Ensemble. A native of Huntsville, Alabama, he holds the Doctor of Music degree in Choral Conducting from the Jacobs School of Music, Indiana University. Read more at JoshuaHarper.Instantencore.com. 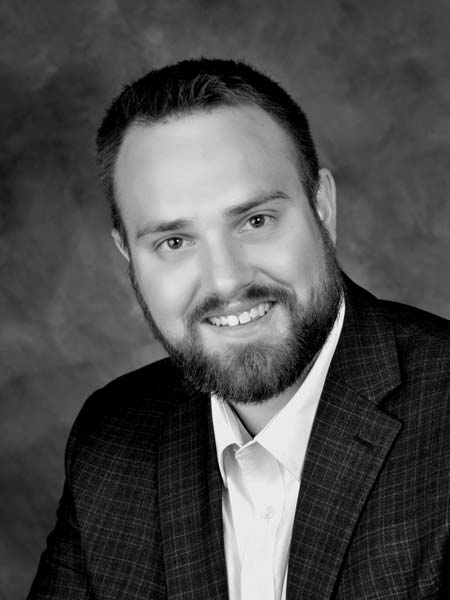 Originally from North Carolina, Jacob earned a Bachelor of Music in Music Education from the University of North Carolina at Greensboro where he studied voice and organ. After graduating, he began working at Prescott United Methodist Church as the Director of Music and serves as the Assistant Director of the Prescott Chorale. 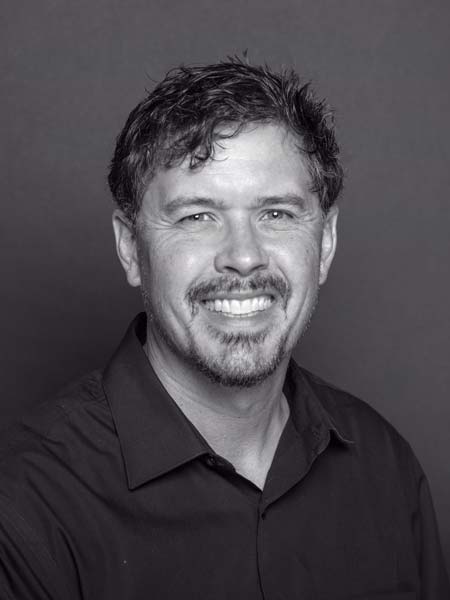 Mike Nache and his wife Joy moved to Prescott Valley from Chandler in 1998. He is extremely excited to share his talents with the Camerata Chamber Singers! His acting/singing credits include lead roles in “Les Miserables” and “The Hunchback of Notre Dame” at the Prescott Center for the Arts. Through Yavapai College, Mike has also performed in “Phantom of the Opera, “White Christmas”, and “The Secret Garden”, again all lead roles. Lastly, Mike has been a regular tenor soloist with the Prescott Pops since 2010. 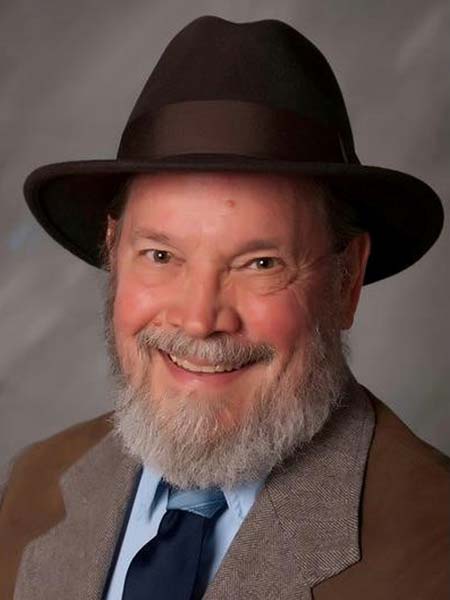 In 2001, on retirement from a career in music education, Russ and his wife Sherry moved to Prescott, Arizona where both enjoyed nearby family. In 2006, Russ went on hiatus from performing after the loss of his wife.
Later he joined the Chamber Choir at Yavapai College and then in 2014 joined the Prescott Chorale in preparation for their tour of France on the Salute to Valor celebrating the 70th Anniversary of D-Day, directed by Dennis Houser. Shortly after that he also joined the Camerata Singers, directed by Dan Boyce. These two commitments have continued for the past seven years. 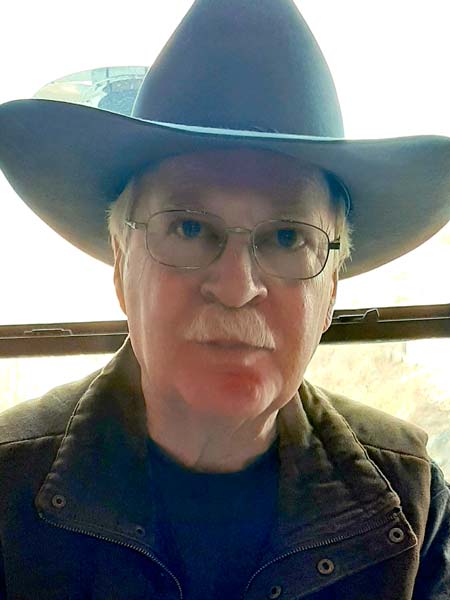 Born in Phoenix, Sandy is a 5th generation Arizonan who grew up on a 1000 acre ranch outside of Chandler, AZ. He graduated from ASU with a degree in Marketing in 1970. While still in college, Sandy joined Motorola Semiconductor Corp in 1966 where he ultimately spent his entire career until his retirement in 2001. Sandy always enjoyed music and started singing and playing various musical instruments at an early age. In addition to the Camerata Chamber Singers, he’s also a member of the Pops Symphony Chorus and Prescott Chorale. 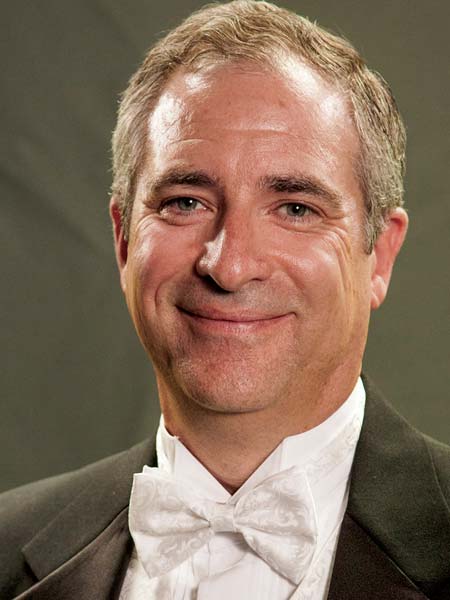 Joseph Place is the Executive Director/Conductor of Prescott Symphony Orchestra and has served that organization since April of 2015. Joseph enjoys conducting, singing, and playing trumpet, guitar and bass guitar. He also enjoys arranging and orchestrating music. He received a Bachelor of Music degree from Grand Canyon University and studied additionally at the University of Redlands, California. He is married to Debbie Place and they have three wonderful adult daughters. 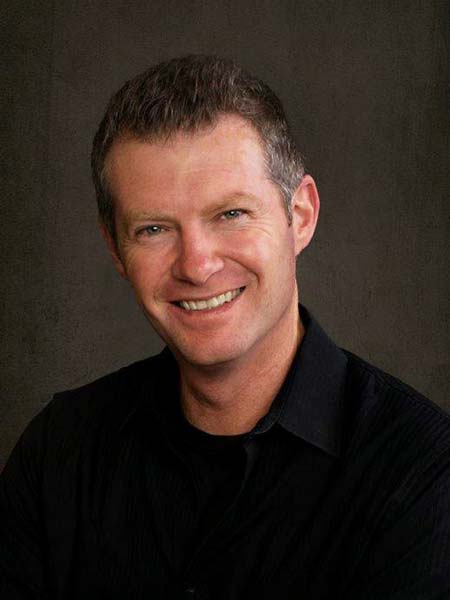 Dr. Craig John Ralston is the Dean of Performing Arts at Yavapai College and Director of Programming and Development of the YC Performing Arts Center. He has enjoyed a 35 year career in music as a performer, professor, conductor, director, composer and administrator. He is thrilled to be a part of Camerata this season and to sing alongside Prescott’s finest singers. He has written and published numerous choral works, believing that the voice and the chorale experience is paramount in our human musical experience. 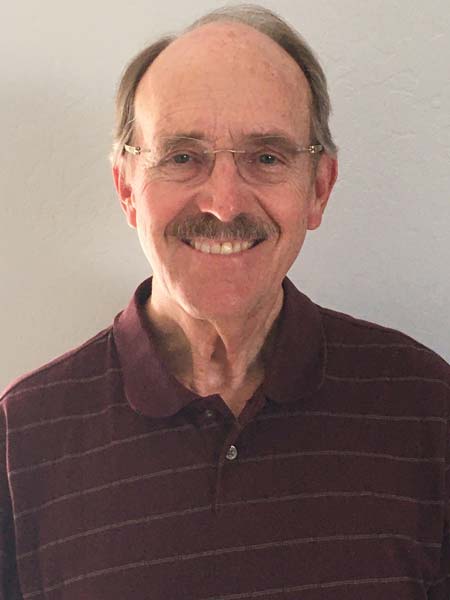 Jim is a physician in practice in Prescott for over 40 yrs. He has had a lifelong interest in music. He has sung in Master Chorale at Yavapai College for 20+ years, he recently performed in the musical “Beauty and the Beast” at PCA. He has been a member of Camerata for several years. Singing and strumming in a local ukulele group has been a fun musical outlet for him. Other interests include competitive cycling and volunteering at Sharlot Hall Museum. 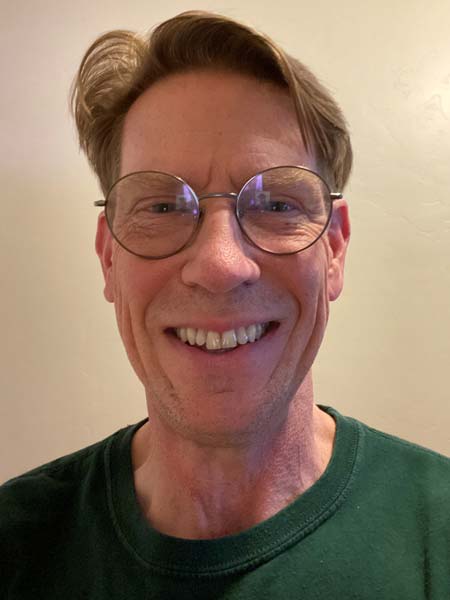 John specializes in family medicine and addiction medicine. Husband to Gayle Gregory, he is father of four and grandfather of one. He loves hiking and trail-running. In earlier life chapters he’s been a rock-climber, country doc, home-schooler, Bob Dylan wannabe with guitar and harmonica, and violinist through high school. He’s sung with the Carolyn Eynon Singers and Prescott Chorale and is a novice handbell ringer.

You have Successfully Subscribed!